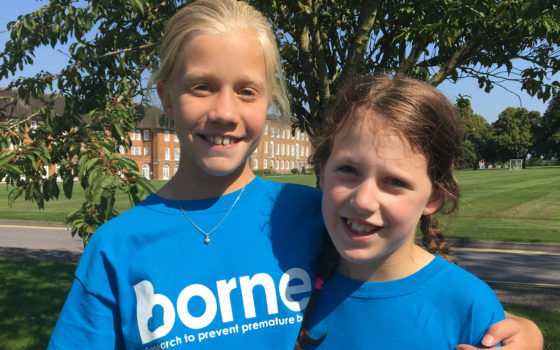 Ten-year-old Lois and Freya aren’t afraid of a challenge. In August, they completed their first triathlon and raised an amazing £,1500 in support of Borne’s research into premature birth.

On a break from St Swithun’s School, the girls trained all summer in preparation for a busy and ambitious day: a 5k cycle, a 5k run and a 1-mile swim.

Premature birth hits close to home. Not only was Lois born prematurely, she also lost a brother and sister to prematurity. The triathlon was her way of honouring their memory and helping other babies who are born too soon.

Lois’ mum, Angela, explains how the idea came about:

“Lois was born at 33 weeks. She was only two when we lost her twin brother and sister, Thomas and Olivia, at 22 weeks. They lived for about half an hour and then were gone. They are a very big part of our family and Lois always talks and thinks about them.

A few months ago, Lois saw the interview with Will and Caro Greenwood about his Arctic Challenge and it inspired her to help. She asked if we could look at Borne’s website and we wanted to find out more.”

We asked Lois what motivated her:

“As soon as I found about Borne, I wanted to raise money for them. One day, I told my friend Freya. She knew that I had lost a brother and sister due to premature birth and that I was premature, and she told me she would do it with me.”

For Freya, the decision was easy:

“I want to help my best friend Lois because this means a lot to her.”

“Lois and Freya came up with the idea all on their own. They came bounding out of school one afternoon and announced that they were going to do a triathlon! I am immensely proud of them.”

“I found the training hard, but I carried on. I knew the harder I trained, the easier it would be on the real day. The hardest part was the 5k run. The easiest was the swim which I really enjoyed.” 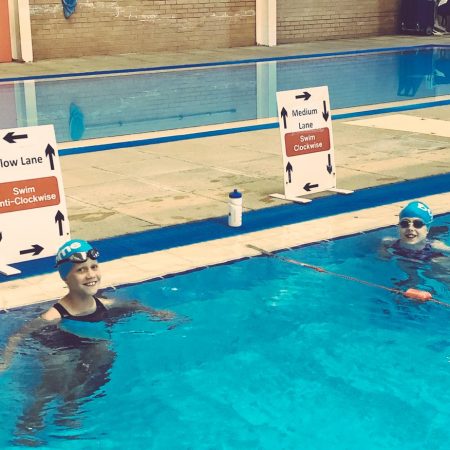 The girls raised an incredible amount to support new research into premature birth, and they have big ambitions for it:

“I hope that the money we raised means that, in the future, it will be possible for babies to be saved from being born early. I want prematurity to be a thing of the past.”

“I hope that Borne’s research will help doctors to understand the reasons behind premature labour and help to identify drugs, medication or interventions to prevent mums going into premature labour. Anything to stop others from experiencing the pain of losing a baby who is born too early.”

A huge thank you to Lois and Freya for challenging themselves and raising such an incredible amount. Thank you to Lois’ mum, Angela, and Freya’s mum, as well as St Swithun School in Winchester for their support.

Congrats Lois and Freya from all at SS Prep on an exceptional achievement today! 1.6km🏊🏻‍♀️5km cycle🚴🏼‍♀️5km run🏃🏼‍♀️A fantastic display of #grit when it got tough - we’re so proud! They have raised over £1500 for @BorneCharity !!! @StSwithunsPrep #thesegirlscan 👊🏼 pic.twitter.com/X8je0MFHWA

A mile in the bag for these 2! Fantastic swim - 64 lengths completed! 🏊🏻‍♀️ #triathlon @BorneCharity pic.twitter.com/lI7bHqg8Z7

You can still donate to Lois and Freya on their JustGiving page.

If you would like to do a charity challenge in aid of Borne, get in touch with Sophie: sophie@borne.org.uk.