David and Linda became grandparents earlier than expected, when Russell was born 14 weeks too soon.

Many of our friends, already grandparents had told us that having a grandchild is the most precious gift and a joyous experience. So we were delighted when our son, Richard and his wife, Sophie, told us in late 2020 that they were expecting a baby. This was to be our first grandchild, and it was really hard keeping it a secret until after Sophie’s 12-week scan.

Despite Covid, Sophie was able to have regular ante-natal checks at Chelsea and Westminster Hospital, which indicated a normal pregnancy and healthy baby. Both of our own children had been born without any issues and there was no history of prematurity in the family (on either side), so none of us expected any complications.

“We were really looking forward to welcoming a new family member in early May 2021.”

On Linda’s birthday, 2 February 2021, we did our usual weekend Skype with Richard and Sophie – this had become a regular event, partly because of Covid restrictions, but also because we are not local to London, where they live. Sophie had mentioned some abdominal discomfort, but she had been reassured that everything seemed fine and that perhaps the discomfort was just Braxton Hicks contractions.

Imagine our shock the following lunchtime when Richard rang to say that Sophie had been admitted to hospital. That morning she noticed some bleeding and, although she felt fine, she thought she should get checked out at the hospital. Thank goodness she did. By the time she was examined, she was 4cm dilated and they were told that she would give birth imminently – 14 weeks early – although the medical team would try to delay it for as long as possible.

“We still remember the phone call; shock, disbelief, anxiety, and a terrible feeling of helplessness.”

As parents, the instinct is to protect your child, and although Richard was now an adult, those primal feelings of love and protectiveness kicked in. Because of Covid lockdown we could not travel, and the next hours were a complete blur. There were occasional text messages and updates, but it was a horrible waiting game while we relied on the excellent medical team who were doing all they could for Sophie and the baby.

Baby Russell was born two days later, at 26 weeks and 6 days, by emergency Caesarean section, weighing just 1.1kg (2lb 6oz). He was immediately taken to ICU in an incubator, and that was the first picture we had of our grandson. It is hard to express how we felt at that time.

“We know of babies who had been born premature, but we had never considered what that might actually mean.”

To see such a tiny infant, on a ventilator and wired up to all sorts of medical equipment, was distressing, and it was so hard for Richard and Sophie, juggling their own feelings while also trying to stay positive for our sakes.

Their experience was immensely complicated by Covid, as only one parent at a time was allowed to be with Russell. They moved in with Sophie’s parents who could offer some practical support, whilst we, living 120 miles away, could only watch and wait. 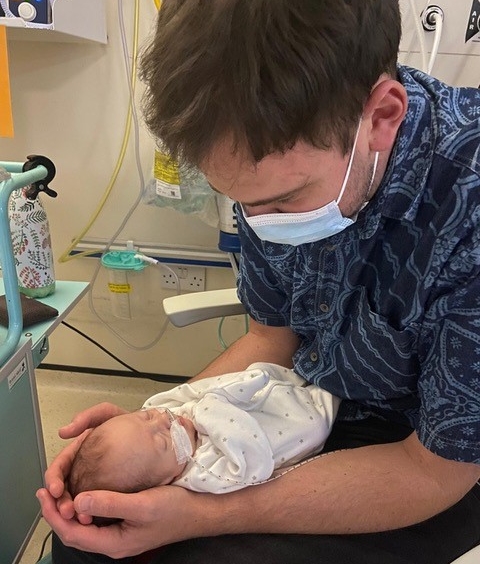 The rollercoaster of events and emotions continued for several weeks, as Russell had suffered a brain bleed, and also developed necrotising enterocolitis (NEC) – a potentially fatal illness – and sepsis. Amazingly he overcame these hurdles and after a couple of months, he was well enough to be moved to St George’s Hospital, Tooting, much nearer to Richard and Sophie’s home. They were now able to be together with Russell for the first time, although still wearing masks – Russell still had not seen their faces since being born!

He was finally able to leave hospital around 13 weeks after his birth – a wonderful moment long anticipated. That said, his homecoming was by no means straightforward, complicated by him being discharged on home oxygen. Once again, our ignorance of these issues was evident, as we hadn’t realised that oxygen cylinders and a sleep apnoea mat were necessary as he was still vulnerable, tiny, and only just past what should have been his due birth date.

Our first visit to meet our grandson a few days later was such a joy. We felt so proud at the courage and resourcefulness that Richard and Sophie had shown throughout, and how they had adapted at home. To have a cuddle with Russell was incredible, though we were a little daunted by having to negotiate the tube carrying Russell’s oxygen. He seemed so very tiny, but so very perfect.

Their first visit to stay with us in Wolverhampton was very special.

“Oxygen enhancement was no longer needed, and for the first time we felt that special connection that grandparents have with their own child’s baby.”

Unfortunately, the shadow of Covid limited our contact with them in the coming months, as it was important that Russell did not pick up any infection which might affect his health. It was decided that it was best for them to spend Christmas in London, in case they needed to access medical facilities for Russell. Instead, we had a belated Christmas celebration in January, watching with pride as Russell unwrapped his first Christmas presents from us.

Celebrating Russell’s first birthday in February this year was a joyous occasion for both us, his auntie Lisa, and all of Sophie’s family, and we are now proudly witnessing his developmental milestones as a happy, healthy little boy. 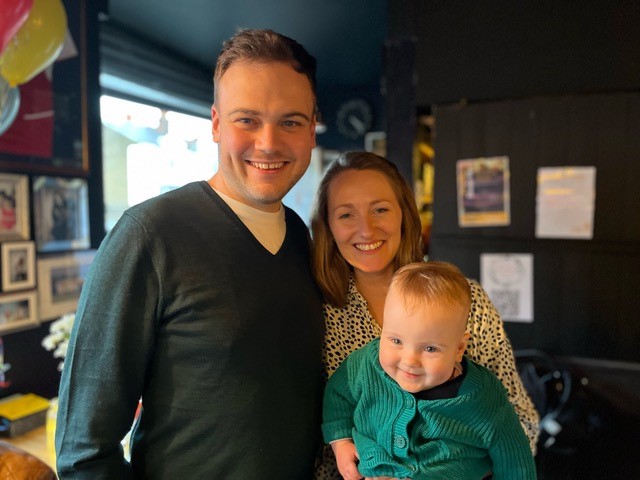 We are so grateful to the hospital staff who, with continuing research, are offering life-saving drugs and interventions to premature babies. We still do not know why Sophie went into premature labour, but we are now so much more aware of what this means in practice, and the impact it has on the baby, the parents, and the wider family network. We wanted to share our experience with Borne to demonstrate a positive outcome from a difficult situation, and to highlight the importance of Borne’s continuing research into the causes of premature birth.

With your support, we can continue to invest in groundbreaking research to keep babies in the womb for longer and give them the best possible start in life.