Fiona Mylchreest, mother of five and wife of Borne Chairman Julian Mylchreest, shares her experiences of her son Cormack, who was born prematurely.

My son is bigger than me. I’ve been pretending for a while that he’s got sticky-up hair, or thick-soled shoes, but actually he’s just enormous. He grows in the night so his clothes don’t fit in the morning. I am big but he is bigger.

I know it’s common for mothers to find their children have outgrown them, but the remarkable thing about Cormack is that he started off so teeny.

My giant son started off his life several weeks too early, about the size his fists are now. He was born in a strange drama of blood and bells and running feet and was carried off to intensive care.

He seemed tiny and perfect and still as I sat by his incubator and I marvelled at how angelic he was, how well-behaved. And then a nurse in scrubs came and said he wasn’t well behaved, his little heart was wiped out after all the trauma. She gave him caffeine, a tiny injection in a vein thinner than a scrap of blue thread. I wanted to put him back inside me and keep him safe from the world. He wasn’t ready.

“I wanted to put him back inside me and keep him safe from the world. He wasn’t ready.”

He was so well cared for, but in those days he grew very slowly. He had horrible reflux. I would come into the high dependency unit, give him a quick bath, and dress him at top speed before his tiny body started shivering. He’d be all warm and baby-smelling and I’d snuggle up with him and feed him. Minutes later he’d retch and vomit it all out again and we’d both smell like sick. I thought he’d never grow.

I didn’t know why he was born early and mostly I didn’t think about it. I was just relieved he was alive. There were other babies much smaller and sicker than Cormack.

Some never went home. I realised how lucky we were to be in Chelsea and Westminster receiving expert care.

I was grateful, but I wanted to go home. There were all sort of criteria babies had to meet to go home, and one was size; I was so frustrated that baby Cormack did not grow faster.

The nurses said the reflux would be better when he was bigger, but he couldn’t get bigger. The babies were weighed twice a week and I would look forward anxiously to weighing day, as if I were doing a test. 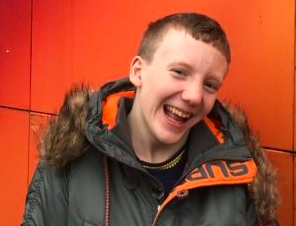 It’s hard to believe that sicky little bundle who grew so slowly is the same 14-year-old who split his blazer across the shoulder seams and eats bread by the loaf. I appreciate much more now how very lucky we were, that both I and Cormack were cared for with such skill and resources and patience.